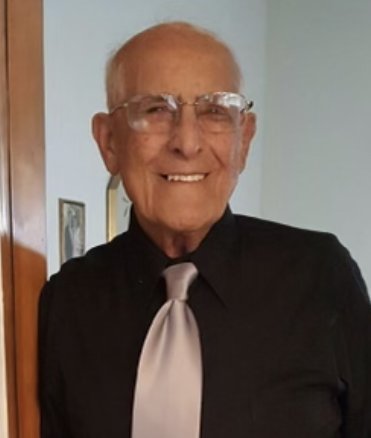 Born in Plainfield, Louis was a lifelong resident of North Plainfield and a long time communicant of St. Joseph’s Church, serving occasionally as an usher. In his youth he served as an altar boy.

Courageously enlisting with the United States Navy, Louis served our country as a signalman on the USS Brennen during WW II. His war experience has been video documented by the Oral History Program of the Battleship New Jersey. After his service, Louis married Philomena DeLago and proudly purchased their one and only home and together raised two daughters.

Louis worked as an account manager for over 30 years for Buffalo Tank in Dunellen, NJ, a division of Bethlehem Steel. His passion, however, was for music. Starting in his teen years, Louis played the saxophone and clarinet in Big Bands. He continued to play in Big Bands well into his nineties and was a proud member of the Nostalgia Big Band. He enjoyed sharing his love of music with his daughters and grandchildren. He will be forever remembered for his smile, sense of humor, love for his family and friends and work ethic. He was a devoted and loving husband, father and grandfather.

Son of the late Angelo and Rose (Importico) Russo, he is survived by his wife of 73 years, Philomena Russo; two daughters, Susan Spadaro and husband Michael and Sandra Reo and husband Joseph; a sister, Vera Taylor; and several nieces and nephews.

He will be dearly missed by his six grandchildren, Eden, Melanie, Juliana, Katherine, Samantha and Joseph.

In lieu of flowers, donations may be made to the Battleship New Jersey at battleshipnewjersey.org to help keep this floating navy museum open during these trying times or to any Veteran Organization of your choosing.

During this ongoing pandemic, according to Executive Orders and the CDC guidelines, we kindly ask that face masks must be worn while visiting, to be mindful of physical distancing to the best of your ability, and are asking visitors to minimize time spent indoors to allow everyone a chance to pay their respects. We thank you for your understanding and for taking these precautions during this difficult time.